As time moves on, key works of modern architecture become part of our universal patrimony and require proper maintenance, restoration and protection. In India, this applies to modern masterpieces by such figures as Le Corbusier, Balkrishna Doshi, Charles Correa and of course, Louis Kahn. Kahn built two projects on the subcontinent, the Assembly Complex in Dhaka, Bangladesh and the Indian Institute of Management in Ahmedabad (IIMA). Both can be counted among the greatest works of his mature years and both reflect his response to the cultures, climates and traditions of their respective places.

But now the administration of the IIMA has announced that the 18 dormitories, integral to Kahn’s overall design of the complex, will be demolished and replaced with buildings by an as-yet unnamed architect, on the same footprint, as if anyone can step into the master’s shoes.

IIMA was the brainchild of the industrialist and philanthropist Vikram Sarabahi, who realized in the late 1950s that India needed to train its own cadre of managers and entrepreneurs as part of its ongoing modernization. Young Doshi was offered the job but deferred to Kahn, whom he believed to be the next best after his own mentor, Le Corbusier. Corb had, of course, built four buildings in Ahmedabad, among them the magisterial Millowner’s Association Building (1954) on the banks of the Sabarmati River.

Kahn’s project dates from the early 1960s and basically contains two sectors ingeniously locked together: the block and court containing the Vikram Sarabhai Library, Lecture Halls and Administration; and the 18 dormitories arranged as a sort of diagonal flotilla in which the buildings and the spaces between are given equal emphasis. In his scheme, Kahn was inspired by several prototypes in the history of architecture, from monasteries with courts and cloisters, to the brick cylinders of the 14th century Albi Cathedral in France, to the outdoor rooms of the 15th century palaces at Mandu in India. 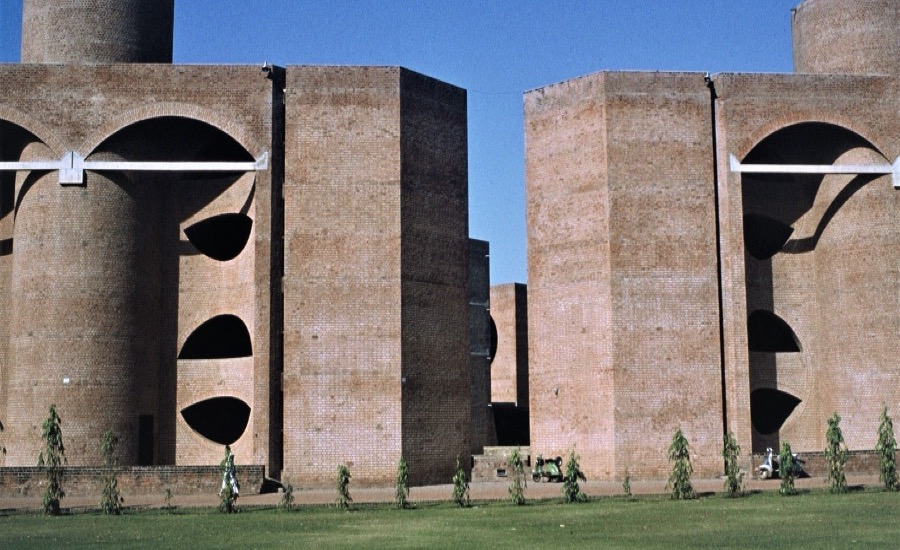 Kahn dormitories at the Indian Institute of Management in Ahmedabad in 1985. Photo- William J.R. Curtis

The complex is built mainly in brick, with some interventions of concrete for lateral bracing and tie bars. The architecture has a timeless atmosphere, as if it had stood there for centuries rather than just decades. With its interweaving of space and form, light and shade, orthogonal and diagonal geometries, the dormitory complex is a virtuoso demonstration of Kahn’s immense skill as a designer. A citadel of learning, replete with cylindrical towers, shaded streets and squares, it is not unlike a tight-knit Indian fortified town.

Over the years, the naked brick surfaces gradually deteriorated, possibly due to water seepage and the rusting of steel reinforcing. In 2001, an earthquake inflicted further damage and cracking. There was even loose talk about pulling parts of Kahn’s project down.

Then in 2014, IIMA announced a competition for the restoration and updating of all of Kahn’s buildings on the campus. The Mumbai firm SNK (Somaya and Kalappa Consultants), with a strong record of historic restoration, won. The challenge was to preserve Kahn’s architecture while updating the functionality of the interiors. By 2017, SNK had completed the renovation of the Library/ Lecture/Administrative block—and received a prestigious award from UNESCO for the work, which was cited as model for the restoration of other major modern structures in India. Doshi, who lives in Ahmedabad, told me the library looked as good as new.

It was understood that the 18 dormitories and the spaces between them would also be restored by SNK. The architects took the most damaged of the structures to experiment with a range of techniques. But the administration of IIMA termed the trial restoration unsatisfactory and announced the intention to knock down all 18 dormitories. Yet an internationally recognized expert in restoration visited the building SNK worked on and found that the renovation was altogether satisfactory.  Why the school has decided to raze the historic structures remains murky. 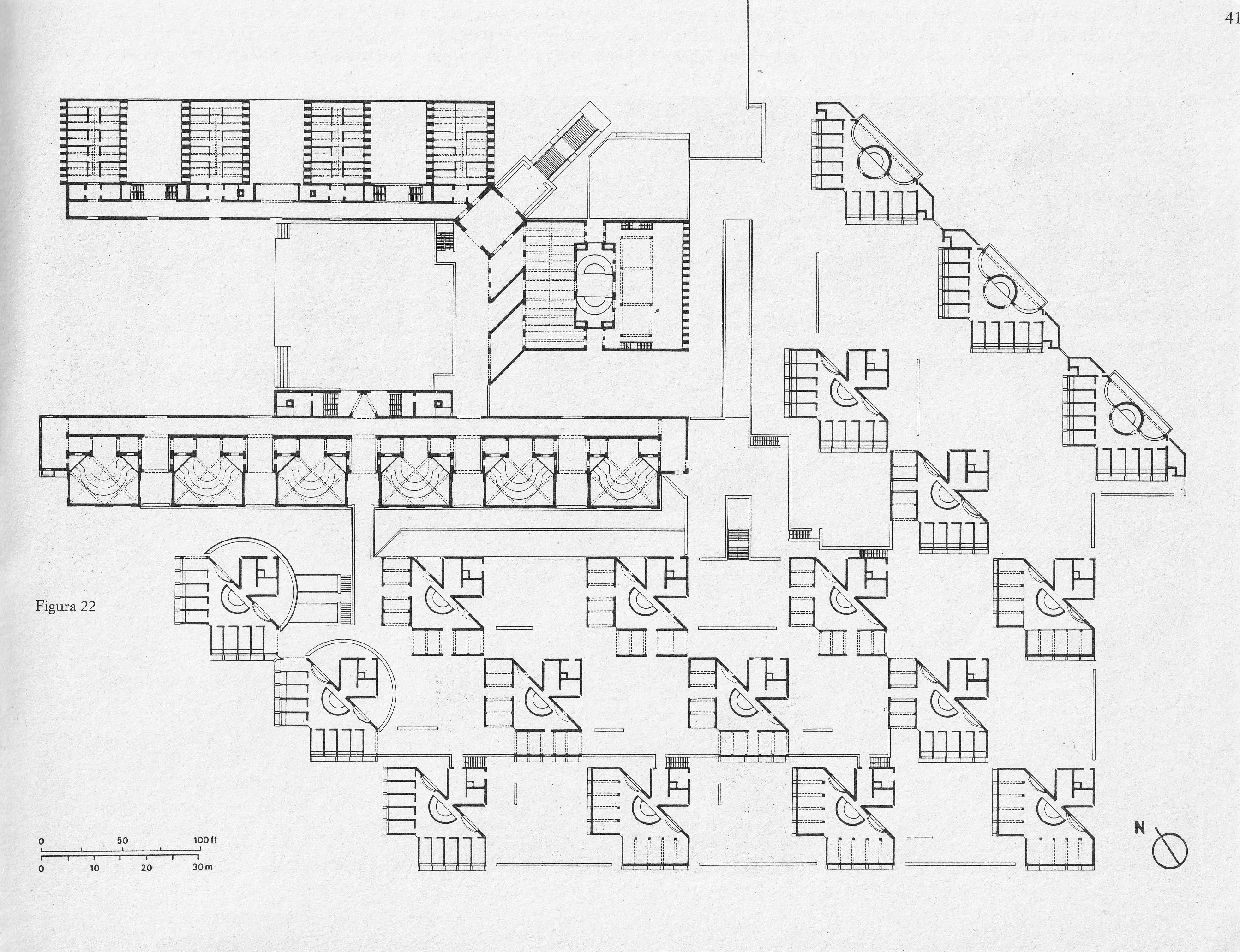 Kahn’s plan for IIMA. Block and court yard with Library, Lecture Halls and Administration, top left. Array of condemned 18 dormitories on diagonal geometry, bottom and right. Entrance to the campus is above to north east. (Credit: Casabella, 571, September 1990.)

The leadership has tried to present the Library/ Lecture Hall/Admin block as an example of “heritage” architecture while being prepared to destroy the rest. But the existing campus is an artistic totality: the notion of keeping the Library/ Lecture/ Admin block without the array of dormitories—and pretending this does not violate the meaning of “heritage”—is preposterous. Can one imagine destroying the palace in the revered 16th century Mughal capital of Fatehpur Sikri, near the Taj Mahal, and then parading the orphaned mosque as an example of historic preservation?

The director and governing board of IIMA are temporary custodians of a masterpiece which needs to be fully restored and sensitively adapted for changing uses, and then handed on to future generations who will continue to be inspired by it. Nothing less will do. They have the best-qualified restoration architects on board and should let them complete the work as originally agreed. The destruction of Kahn’s scheme is cultural vandalism; it would set a terrible precedent in an India where so many fine buildings are under threat from rabid development. IIMA’s international reputation is at stake.

Current laws in India provide national heritage protection only to buildings and sites more than 100 years old. This leaves Le Corbusier’s Millowner’s Association and Kahn’s Institute of Management in Ahmedabad in extremely vulnerable positions. A few years back, the city of Chandigarh—planned by Le Corbusier in the 1950s, with its extraordinary monuments such as the Assembly and the High Court—achieved protection as a UNESCO World Heritage Site. Instead of ruining their masterpiece and their reputation, the leaders of IIMA should be persuaded to complete the restoration of Kahn’s buildings at the highest possible level, and perhaps attain the same World Heritage status as Chandigarh.

Previous Article Bihar scrapped APMC Act, mandi system 14 years ago; here’s what it did to farmers