THE SEVEN WARNING SIGNS: IT IS TIME TO SEEK THERAPY/COUNSELING

The Case of the Haunted Hostel- Part I

Sonali, Kalyan and Snehanjali studied together at the corporation school. They belonged to the same year. The boy was older. But having failed a few classes he studied with them. Other students would tease him for his shortcomings. They would call him names, make faces, laugh and crack jokes on him. Sonali and Snehanjali (Sneha) had been friends from previous classes. One was inclined to think their opposing natures brought them together. While the first woman was fearless and stood up for justice no matter what the cost and that too at such a young age, Sneha was timorous. She was good at heart but she lacked timber. She panicked in situations though never deserted her friends.

Sonali protested on behalf of Kalyan. She harangued the class in good imitation of their strict principal and the guilty cowered before her wrath. However from that day on they somewhat stopped bothering the boy, at least in front of her. Kalyan was grateful .The trio became great friends.

Sonali was easily the brightest. She would solve arithmetic problems within no time. But Kalyan or better known as Kaly as his two friends called him was weak in mathematics. She would help him grasp at the basics. She had extraordinary patience. One could see her working tirelessly after school to make Kaly understand the Average or the Simple interest. Sneha would be there too sometimes listening and sometimes doing her own work. They were from the same district. They would play together during breaks. On holidays they would go together on long walks. They would plan adventures between classes which they were to undertake during the weekends. Sonali was the
eldest of four siblings, Kaly had a younger sister and no relation of Sneha is known till date; but one thing is certain that she was a very lovely child.

The time our story starts the summer recess was already in progress. They were two weeks in. Sonali was feeling restless. No news from her best friends has reached her. Sneha was supposed to be holidaying in Digha on the first week. But she would be back now. Kaly had not divulged any plans as such. So he should be home. But he had made no attempt at contact. Sonali’s younger sister was practicing recitation. Her two younger brothers were playacting on the floor. Their parents were not at home. She looked out of the window. They lived in a first floor apartment of an old house. The window had parallel grills and a lace white curtain was bunched to the left side. A grimy brick wall of a dilapidated building stood opposite. She got on all fours, crawled to the window and peered down. It was noon. The alley in front was mostly deserted. It was one of those old Kolkata streets. One could hear baying horns of the invisible traffic but only cycles, rickshaws or scooters ever traversed that lane. She heard the jingle of a hand-drawn rickshaw. Sonali loved these vehicles. She loved old things. A dark skinned man in yellow turban, shabby briefs and short wrap covering his loins but exposing the tanned bare legs was pulling at an occupied rickshaw. The sole occupant was a man. He was rotund around the middle with a red round face. He was seated expansively with his hands rested leisurely on the hand rails. His eyes were half closed and his jowls moved in act of chewing something. The outer walls of most establishments of this area had permanent smears of red stain mostly from spits of careless people. The man was adorned in Khadi Punjabi and white dhoti with kolapuri shoes shining on his feet. He was swaying in rhythm of the movement of the rickshaw. The picture was of one immense contentedness. Sonali was so immersed in observing the ‘babu’ she jerked out of her reverie at the sound of the door bell ringing.

She being the ‘tallest’ could only reach at the Chitkini. Her parents had returned. Her mother said, ”Sona ki korchilis tora?(Sona, what were you doing?)”. Sona shrugged. They had bought chocolates. Sona loved chocolates. Her face lighted up. She took them and hurried inside to enjoy with her brothers and sister. Outside on the corridor her father was saying, ”The neighbours have reported their house is empty for a week now.” Sona came outside and said, ”ki hoyeche baba?(What is the matter father?)”. “ Haven’t you heard? Kalyan’s family has gone somewhere. It is just that no one knows where. The house stands eerily deserted. If none their servant Sambhu always stays. Kalyan’s father is paranoid about thieves.” Sonali was dumbfounded. They were supposed to be friends. At least Kaly would tell her before going somewhere. Where could they have gone?

Next post Dynt Pulse: Pirates of The Caribbean & Game of Thrones Cover | Sitar 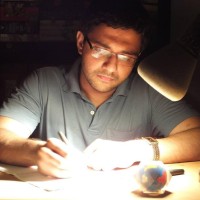 About the Author Siladitya Banerjee