A quick stats check before the Champions League Final

What day is it? Its the UEFA Champions League FInal day.
As Real and Atletico Madrid are about to face each other in this season ending finale, twice in 3 years today in San Siro, Milan, here are some quick pre-game stats to look at.

This season At Madrid have won 6 and lost 3 and drawn 3 games out of their Champions league games. They have only been able to score 16 goals but at 7 goals, have conceded the 2nd least amount of goals in the competition. At Madrid has managed to keep 8 clean sheets in 12 games; only 3 teams have manged to score against them- Benfica tiwce , Barcelona once and Bayern Munich once. Antonie Griezmann is their leading goal scorer in the competition with 7 goals, who is presently the 5th highest goal scorer in the tournament this year, just being able to beat Messi who scored 6 in 7 matches. Gabi has succesfully completed the most number of passes for At MADRID and has complteted 6th highest number of passes (660 out of 782) in the Champions league with an accuracy of 84%.

Who are you rooting for?

Next post Is bannng ipl from maharashtra really solving our water crisis? 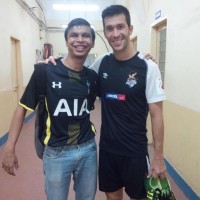 About the Author Abhishek Joshi