Lakshman Bhimarao Gadagakara was, according to available evidence, the earliest to write an independent novel in Kannada and that novel, Suryakantha, was published in 1892 as a response to a prize of Rs. 30 offered by the Karnataka Vidyavardhaka Sangha, Dharwad, to promote independent novel writing in Kannada. By calling Suryakantha, ‘Kannada Hosa Kadambari,’ Gadagakara was also the first writer to use the word ‘kadambari’ for the ‘novel’ in Kannada. That this novel is set in a fictional kingdom makes it appear as an historical novel. But, coming after a spate of ‘translated’ historical and romantic novels, puran-ic and marvellous narratives, Suryakantha was the earliest novel to have responded, in a small way, to the issue of women‘s education. Gadagakara wrote another novel, Chandraprabha, in 1896, which is the focus of this article. 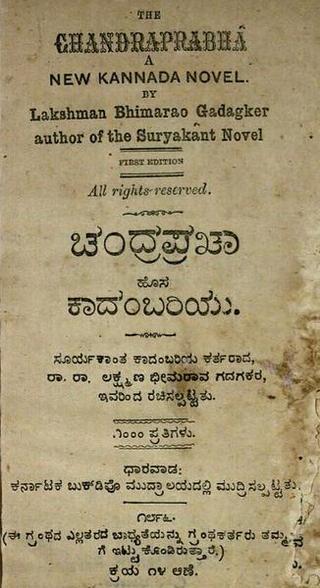 In Chandraprabha, it is the heroine, Chandraprabha, who displays intelligence, courage and resilience. Chandraprabha is the daughter of Kripasheela, ruler of Suvarnapura, and his wife Bhagyasheele. The couple had earlier adopted, Kubuddhi, son of Kripasheela’s elder brother. The grown-up Kubuddhi is now jealous of Chandraprabha as he can no longer lay any claim to Kripasheela’s wealth and kingdom. Chandraprabha is given in marriage to Manamohana, the prime minister in the court of Pratapasimha, the ruler of Jayapura. Kubuddhi, in the meanwhile, due to the good offices of Manamohana, is employed in the court of Pratapasimha, but his resentment towards Chandraprabha and Manamohana does not diminish. Pratapasimha dies of old age and his dissolute elder son Kumathi ascends the throne. Kumathi dismisses the ministers and generals of the old regime and installs his own degenerate friends to these posts. Kubuddhi now gets an opportunity to ingratiate himself with the new ruler and through this new-found influence, wants to finish off both Chandraprabha and Manamohana. Kumathi’s misrule and his debauched ways inevitably lead to economic ruin and social chaos in the kingdom. The old ministers and generals rise in revolt, but Manamohana, out of loyalty to the kingdom, manages to avert the kidnapping of Kumathi and his cronies. Kubuddhi informs Kumathi that it was Manamohana who instigated the rebellion, but he had averted it. Manamohana is implicated on false charges and is imprisoned.

When Chandraprabha realises that her life too is in danger, she leaves with Manamohana’s followers to her father’s kingdom, Suvarnapura, and vows to defeat Kumathi and secure Manamohana’s release. During her passage through the jungle, she is attacked by a hunter tribe and is saved by an old friend of Manamohana. Subsequently, both become her allies and promise to help her in her battle against Kumathi. Chandraprabha returns to Suvarnapura and takes over the administration from her ageing father. Manamohana manages to escape from prison and after a harrowing journey through the jungle in torrential rain, a near drowning, and a boat accident where he manages to rescue people, he finally finds his way to the court of Amar Singh, the ruler of Jayajayawanti, who recognises Manamohana and pledges his support.

Chandraprabha launches her attack on Kumathi’s kingdom and is helped by her allies. Kumathi seeks the help of Dost Mohammed of Sayyadpur, who demands half of Kumathi’s kingdom for his help. Amar Singh lends his army to Manamohana to fight Kumathi. The war is described in great detail and ultimately Chandraprabha triumphs. Kubuddhi tries to escape, but is caught and is later pardoned. Kumathi and his cronies are arrested and his younger brother Sumathi ascends the throne. Chandraprabha and Manamohana go back to Suvarnapura and take over the reins of the kingdom from Kripasheela.

Gadagakara’s reformist concerns are reflected in many incidents in the novel. He inserts a conversation between Chandraprabha and Manamohana on women’s education. Chandraprabha wants to know whether the general idea that women are less intelligent is true. He replies that not all men and all women are either fools or intelligent people and just because some of them are in either category, it is not right to blame only women, but that ignorance is more in women. Chandraprabha probes further and asks whether this ignorance is a woman‘s natural state or is it because her parents have not provided her with a proper education, to which her husband says that it is not a natural state.

Gadagakara also focuses on social ills, superstitions, blind faith in fake swamis and tricksters. When Rama, a loyal servant of Manamohana, is cajoled into drinking liquor in a local tavern by Kubuddhi’s servant, Gadagakara creates a scene where he shows how people who go around as upright men during the day, end up in the tavern at night. We see a brahmin priest, an astrologer, a rich merchant, a teacher, and a respectable householder in the tavern; each of them discarding decency and decorum under the influence of alcohol. A drunken brawl among the courtiers in the royal court after a music concert shows to what depths the kingdom had sunk under Kumathi.

The novel seems to be set in a fictional kingdom and going by the language and characters, could be located in the northern parts of Karnataka. Language is used as a social marker in this novel, where the ruling class speak a kind of ‘standard’ Kannada and the servants seem to speak a dialect of Kannada spoken in parts of north Karnataka. There are Arab/Muslim soldiers in Kumathi’s army and the neighbouring kingdom is called Sayyadpur ruled by a Muslim ruler Dost Mohammed. Another kingdom bordering Jayapura is named Jayajayawanti and is ruled by Amar Singh.

Chandraprabha here is not created just as an ‘ideal wife’ or ‘daughter’ stereotype. She proves herself to be an adept administrator, streamlining the affairs of her father’s kingdom, starting factories for manufacture of war equipment, organising the collection of taxes from vassal territories, recruiting able-bodied young men for the army, keeping the army battle-ready, and so on. She displays foresight when she pardons the tribesmen who attacked her and turns them into her ally. She comes to the rescue of a poverty stricken family and organises medical help from the palace. Chandraprabha realises the need to be physically strong and fit and so, starts exercising regularly. When Kubuddhi sends his spies to Suvarnapura in various disguises to kill Chandraprabha, she sees through the disguise of one dressed as a holy man. She fails to see through another spy dressed as a fortune-letter, and is ambushed by the other men when she visits his place for rituals, and is rescued just in time. Another spy, who enters the palace as a labourer, manages to hide in her bedroom and tries to kill her. Chandraprabha tricks him and in the ensuing tussle manages to cut off his arm. In the battlefield, she is shown dressed as a warrior, wearing an armour, a helmet, brandishing a sword, shouting war cries to inspire her soldiers. These incidents show Chandraprabha as kind, astute, brave, and also vulnerable.

By creating a character like Chandraprabha, Gadagakara has shown that a woman is in no way inferior to any man in any aspect and it is the continuous subjugation of women through centuries that has prevented them from realising their potential. This radical perspective reveals Gadagakara‘s awareness and acknowledgement of the social upheavals around him. Gadagakara‘s proximity to Marathi society, where debates regarding women‘s education were already taking place, could have influenced his thinking. Even with such a strong woman character for the times it was created, Chandraprabha continues to remain hidden, because the novel looked like a pseudo-historical romance. But looks are deceiving and this novel contains a hidden gem called Chandaprabha.

(A scanned copy of Chandraprabha can be accessed here. )